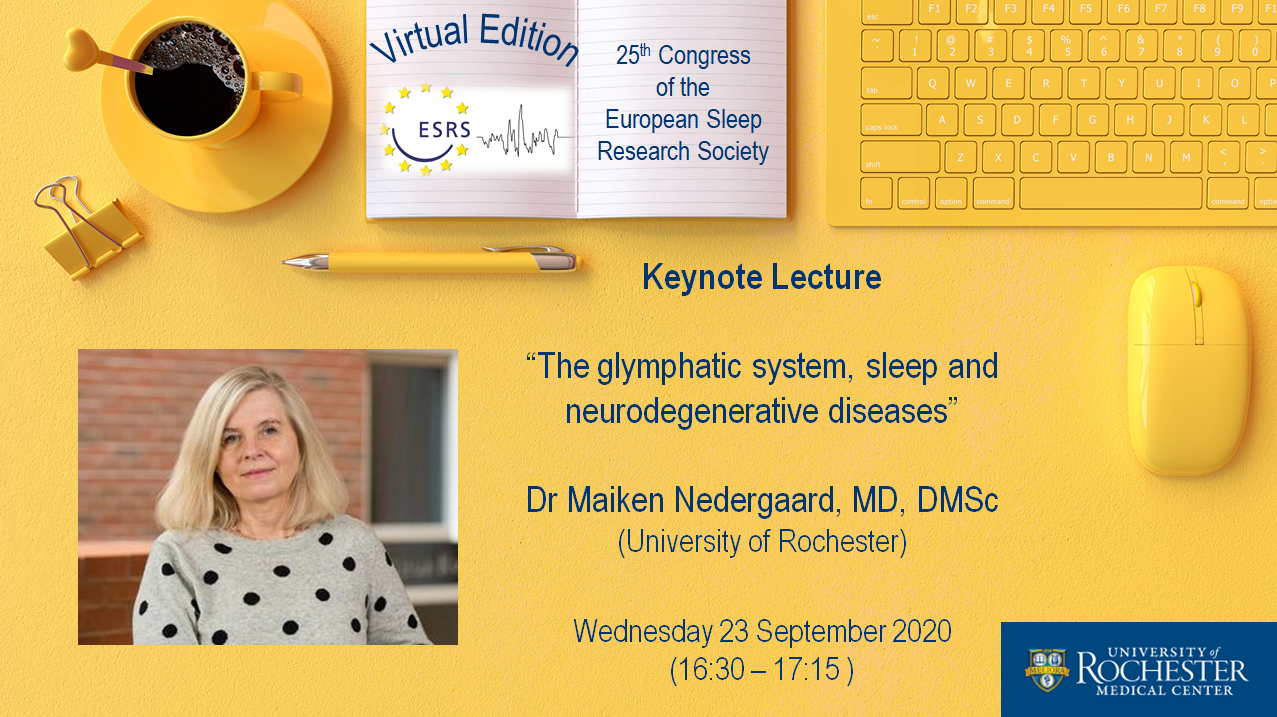 Yes! It’s Friday! Grab a coffee (or tea) and end your week with a quick recap of Sleep Science News and ESRS updates!

These past weeks, we have been busy preparing for the Virtual Edition of ESRS 2020 on Sept 22-24 (see the latest Letter from the ESRS President, Walter McNicholas), with our Scientific Programme confirmed and online.

Joining us will be keynote speaker, Maiken Nedergaard, M.D., D.M.Sc. (University of Rochester Medical Center) presenting her lecture, “The glymphatic system, sleep and neurodegenerative diseases”. Although there are many suggestions as to why we sleep (e.g. memory consolidation), one hypothesis is that sleep essentially “rinses” the brain and facilitates the clearance of metabolites linked with neurodegenerative diseases and ageing.

Described as a “waste clearance system”, the glymphatic system is thought “to promote efficient elimination of soluble proteins and metabolites from the central nervous system”, as well as “distribute non-waste compounds, such as glucose, lipids, amino acids, and neurotransmitters related to volume transmission, in the brain.” Primarily active during sleep, the Nedergaard Lab suggests that the sleep may allow the brain to cleanse itself of neurotoxic waste products—including β–amyloids linked to Alzheimer’s disease.

Therefore, insomnia and poor quality of sleep have been identified as risk factors for neurodegenerative diseases. Check back next week for a longer update on Auguste Deter, the first known Alzheimer’s patient, along with how important a good night’s sleep is essential for brain functioning and cognition. Here is a sneak preview!

“I have lost myself”, was frequently uttered by Ms. Auguste Deter, the first patient to be diagnosed with Alzheimer’s disease. Exhibiting paranoid and erratic behavior, delusions, and issues with speech and memory, the 51-year-old patient was examined by German neurologist, Dr. Alois Alzheimer, at the Institution for the Mentally Ill and for Epileptics (Frankfurt, Germany). Given her young age, Dr. Alzheimer initially diagnosed her with “presenile dementia”. Living in a state of confusion that progressively deteriorated, she soon lost sense of time and space—unable to recall her husband, where she was, and her own name. In this way, the loss of memory is a loss of self.

Interested in or working on sleep and sleep disorders?

Due to COVID-19, the 25th Congress of the ESRS goes Virtual–so you can attend even in your pajamas from anywhere worldwide.

Check out our #ESRS2020 Scientific Programme on our website.

For Spanish speakers, #ESRS2020 will be a joint congress with the Spanish Sleep Society. Both meetings are coordinated in parallel; attendants can participate in both meetings with only one registration. Keynote speakers from #ESRS2020 will have Spanish translations.

We will also have poster sessions, teaching courses, networking lounges, and a stream for early career researchers.

Just published an article? Want your research to be featured? Saw something interesting?  Contact: doris.wu [ at ] esrs.eu.