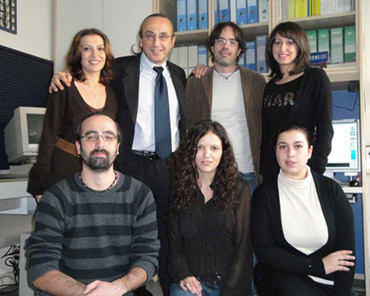 The Sleep Psychophysiology Laboratory was founded in the 1980 by prof. Mario Bertini and now directed by prof. Luigi De Gennaro.
In the first years, the research activity was mainly focused on counsciousness levels during sleep, dreaming and hemispheric cognitive asymmetries during sleep and wake.
Then, great attention was dedicated to the investigation of the psychophysiological features of wake-to-sleep and sleep-to-wake transitions and to the causes and consequences of sleepiness. During this period, several studies were carried out for evaluating physiological, behavioural, cognitive and subjective effects of total, parial and selective sleep deprivation.
More recently, thanks to the developing of quantitative techniques of electroencephalographic (EEG) analysis, the research focus was turned to the mechanisms of normal and pathological sleep regulation, to the relationship between sleep and cognitive processes (i.e., learning and memory) and to the genetic bases of human sleep.
In the last years, finally, with recent techniques such as Transcranial Magnetic Stimulation (TMS) and quantitative EEG, several studies were carried out to investigate the levels of cortical excitability during sleep and topographical differences in the sleep EEG.

In paticular, the reserch focus of the laboratory are:

1) Sleep regulation
The effects of sleep deprivation (both selective and total) on sleep, sleepiness and performance have been studied. Sleep regulation in monozygotic and dizygotic twins is currently under investigation.
With the growing interest and use of quantitative analysis of the EEG, also local processes were studied, showing that SWS deprivation differentially affect different cortical areas.
The issue of sleep loss-induced alterations was also investigated by using different measures of sleep microstructure as Cyclic Alternating Pattern (CAP) and ASDA arousals: pros and cons were also considered.
Moreover, the phasic events of REM and NREM sleep were studied. These experimental contributions showed a substantial independence of different phasic events of REM sleep (MEMAs -middle-ear motor activity- and REMs -rapid eye movements). A complementary relationship between wake and REM sleep was also showed with respect to oculomotor and middle-ear muscle phasic activity. With respect to the NREM phasic activity, particular attention was dedicated to the landmarks of stage 2 (sleep spindles and K-complexes), showing that the former are in reciprocal relationship with SWS (and present a specific topographical distribution) and the latter can be considered as the forerunner of delta waves.

2) Sleep transitions
The transition states, in particular sleep onset (SO) and offset, have been extensively studied. According to our results, the “boundary” between wake and sleep should be shifted toward the onset of stage 2, and the functional meaning of the classical EEG bands, at least during the SO, should be reconsidered. The observed quantitative changes of EEG are: (1) an anterior spreading of the alpha rhythm as the transition progresses; (2) an early EEG synchronization of several anterior areas. Recent findings show that an opposite phenomenon can be seen at the sleep offset. These data were recently confirmed by means of a new EEG analysis techniques, the Direct Transfer Function (DTF), which is able to show the directional features of functional coupling of different cortical regions. DTF data indicated a prevalence of occipital-to-frontal flow of EEG activity at sleep onset; interestingly, these effects are strenghtened by the increase of sleep pressure. Finally, significant correlations were observed between slow eye movements and EEG changes at SO, suggesting that sigma activity could trigger the reduction and the final disappearance of SEMs in the late part of the wake-sleep transition.
We also showed that REM sleep onset is characterized by a general change of EEG activity toward a relative occipital diffusion of power, specifically distinguished by a posterior dominance of middle and high frequencies.
This laboratory has been also deeply involved in the applied research field related to the phenomenon of sleep inertia, using both physiological (EEG, evoked potentials) and behavioral-cognitive measures. Several studies were carried out to show how cognitive and behavioral abilities drastically drop when people are awakened, and how this can be explained on the basis of a reduced cortical activation upon awakening. With the aid of selective and total sleep deprivation these results were further deepened, showing that sleep inertia is strongly affected by slow wave sleep amount and sleep depth.

3) Individual differences/stability/genetics
We recently reported the existence of an EEG fingerprint of human sleep in the spindle frequency range. With the extent to study the biological foundations of the individual differences and using an approach which emphasizes the within-subject similarities, the 8.0-15.5 Hz range of EEG spectral power during NREM sleep was studied. We showed that each individual is characterized by a kind of EEG “spectral signature”, i.e. a peculiar topographic distribution of the EEG power along the antero-posterior cortical axis in the above-mentioned frequency range. Such EEG power distribution remains stable across six consecutive nights (adaptation, 2 baseline, 2 SWS deprivation, recovery) characterized by large differences in sleep architecture and homeostasis. It was suggested that this EEG “fingerprint” could be related to individual differences in genetically determined functional brain anatomy, rather than to sleep-dependent mechanisms. We are currently running an experiment investigating sleep characteristics in monozygotic and dizygotic twins.

4) Sleep and memory
In the light of the recent interest for the relationship between sleep and memory, the laboratory is currently involved in two main projects.
The first study, in collaboration with the Center for Epilepsy Surgery and Parkinson “Claudio Munari”- Ospedale Niguarda (Milano-Italy), involves intracranial EEG recordings in epileptic humans. These patients are submitted to declarative and procedural memory tasks and their hyppocampal and cortical activity is recorded both during the tasks and the subsequent sleep, with the aim of evaluating the effects of different learnings on the hyppocampal-cortical dialogue.
Another research is aimed to study the relationship between sleep and spatial/topographical memory in a real-world context.

5) Sleep and TMS
In the last years we introduced in the sleep research field the use of a new non-invasive technique, called Transcranial Magnetic Stimulation (TMS), that allows to evaluate the excitability of motor cortical areas. We studied the cortical inhibition and facilitation upon awakening from different sleep stages: results showed a significant increase of cortical motor activation during REM sleep with respect to SWS and wakefulness.
TMS was also used with a different experimental paradygm for evaluating (for the first time in humans) the callosal connectivity upon awakening from different stages of sleep. Results indicated a drastic drop in transcallosal inhibition during REM: this change in interhemispheric connectivity may explain some characteristic features of dreams and dream recall.

6) Cortical plasticity and TMS
As regard sleep induced (o favoured) cortical plasticity new research methods have been introduced to investigate variations onto cortical connections. Recently it has been proposed a new paradigm called Paired Associative Stimulation (PAS) that is based on the association of a peripherical electrical stimulus with a magnetic one at the level of M1 (primary motor cortex). With appropriate inter-stimulus intervals it is possible to tune motor system excitability as observable in the Motor Evoked Potential (MEP) modifications by the magnetic stimulus. This kind of modulation that could be induced in a short term lasting till 60 minutes can be considered a good Long Term Potentiation-Like model.

7) Sleep disorders
In a population of subjects with mild sleep complaints, it was evaluated the effect of a placebo on sleep structure. Results showed an improvement of sleep quality, with a reduction of intra-sleep wake and arousal, and an increase in delta power. All these data indicated that the administration of an inert substance can slightly improve both subjective and objective measures of sleep.
Another interest of the laboratory was aimed to elucidating the psychological correlates of sleep complaints. In this case sleep and dreaming of alexythimics was studied, showing a general difficulty of alexithymics in recalling their dreams. Other studies showed that these effects are strongly correlated to (and mainly explained by) depression: a revision of the classical hypothesis of alexithymia as a independent complaint was proposed.
Finally, a collaborative study with the Sleep Laboratory of Geneve (directed by Dr. Emilia Sforza) is aimed to investigate local processes in sleep misperception and hypersomnia. Preliminary results showed that misperceptors are characterized by an higher spectral content on the beta band over the frontal areas.

Key Publications of the Laboratory: