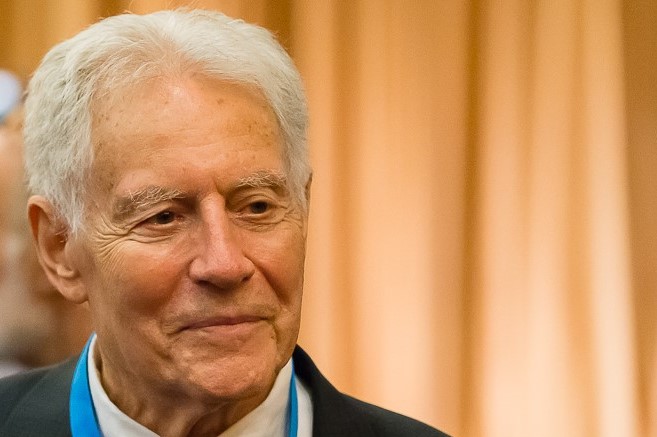 Pier Luigi Parmeggiani, Emeritus Professor of Human Physiology at the University of Bologna sadly passed away in Bologna on May 23 at 93 years of age. He was president of the ESRS from 1984 to 1988 and recipient of the Sleep Science Award donated by the ESRS in 2016.

Parmeggiani’s scientific career started soon after his degree in Medicine from Bologna University. From 1956 to 1959 he visited the lab of Walter Rudolph Hess (who had recently been awarded the Nobel Prize for Physiology or Medicine) in Zürich, where he was introduced to an integrative physiological approach to the study of animal behaviour and started working in the field of sleep research.

On his return to Bologna, he soon had the opportunity to continue his scientific activities and to start the brilliant academic career leading to his position as Chair of the Physiology Department from 1973 to 2001. From the very beginning, his research activity took advantage of the most recent neurophysiological techniques for the study of animal behaviour. He started working with a clear idea in mind that sleep was a behavioural state during which the dialogue between the brain and the body is very close, and that it could be profitably studied in the animal model through a naturalistic approach.

From the late 1960s this approach led him to observe that sleep occurrence was largely influenced by the exposure to an ambient temperature (Ta) far from thermoneutrality. In particular he observed that REM sleep was depressed or even suppressed through cold exposure and that the following REM sleep rebound was finely regulated in quantitative terms. But the most important finding was that thermoregulation was suppressed during REM sleep, since shivering and panting were absent when the animal was kept at either a low or a high Ta, respectively.

The following years were spent demonstrating and conceptualizing the fact that this finding was not merely a trivial and bizarre occurrence, but something that revealed a profound modification of the modalities in which physiological regulation was set during the different wake-sleep states. Overall, the results of his research led him to consider REM sleep as being a “poikilostatic” behavioural state. The final conceptualization of his thought can be found in the book “Systemic Homeostasis and Poikilostasis in Sleep: Is REM Sleep a Physiological Paradox?” published by the Imperial College Press in 2010.

Pier Luigi Parmeggiani was the founder of a school of physiologists in Bologna, many of whom are still active in the field of sleep research. He left an indelible memory in his students and the many collaborators and colleagues he met during his long career, not only due to his excellent qualities as a scientist and teacher of a very wide and varied culture, but also because of his professionalism, moral integrity and the institutional sense that always characterized his actions. A man and a teacher who was able to trace a path that continues to deserve to be travelled.