The main aims of the Committee are: i) to bring the topics of “sleep” and “sleep disorders” to the attention of the EU in order to receive support for research and teaching activities; ii) to promote sleep-related issues from a political point of view at a European and National level.

After the achievements of the past years, the decision was taken to enlarge the Committee and potentiate its activity. Every member will now be given responsibilities to strengthen the relationship between one of the four major pillars of interest for the ESRS within the EU (i.e. Health, Research, Education, and Transport) and the paired ESRS Committee. Furthermore, the interaction between the EU Committee and the Assembly of the National Sleep Societies will be increased in order to better homogenize and synchronize efforts aimed at increasing the visibility of sleep research and sleep medicine in Europe.

The Committee will operate as shown in the diagram. 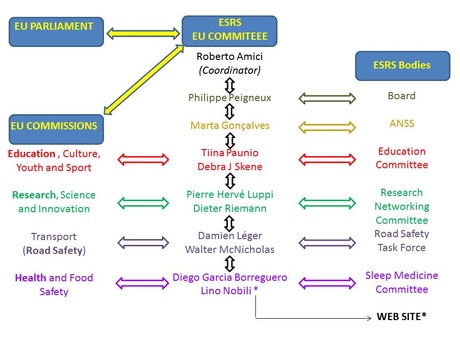