The idea of a European sleep society germinated during an international sleep symposium, “Die Natur des Schlafes / The Nature of Sleep”, which was organized by U. J. Jovanović and held in Würzburg 1971. Prof. Werner P. Koella (Basel) was charged with the task of organizing a sleep congress and preparing the foundation of a sleep society.  A founding committee, including Drs. Walter Baust (Düsseldorf),  Claude Gottesmann (Nice), Uroš J. Jovanović (Würzburg), Werner P. Koella (Chairman), Ian Oswald (Edinburgh) and Liviu Popoviciu, was established. The late Professor W.R. Hess, the most eminent Swiss Sleep Researcher, agreed to act as the Honorary President of the First Sleep Congress.

More than 300 researchers, students and other persons interested in sleep, from all over Europe, including the countries “behind” the Iron Curtain, the Americas and the Near and the Far East attended the founding congress. Sleep researchers from the following countries were present: France, Italy, Spain, Belgium, Holland, England, Scotland, Germany, Yugoslavia, Romania, Hungary, Czechoslovakia, Poland, Israel, Japan, Canada, and the United States.

The Scientific Program, which started after the Opening ceremony on the morning of October 3rd, consisted of 5 symposia with invited speakers and 86 free communications, all dealing with various themes connected to the physiology, biochemistry, pharmacology and psychology, as well as the various clinical aspects of sleep. A series of informal gatherings throughout the evening hours and a banquet on a large River-Boat helped to bring the “sleepers” from so many countries together.

The most important gathering during our Congress, with the most far-reaching results, was probably the Business Meeting during the late afternoon of October 4th , at which about 200 of the Congress visitors participated in the founding of ESRS, the now official European Sleep Research Society. Its main “objective […] should be to promote interest in, and to facilitate the dissemination of, new information about sleep research and related topics”. The Founding Committee guided the assembly through the various businesses, established the Rules, and the officers were elected: President: W. P. Koella, Basel, Switzerland; Vice-President: G. F. Rossi, Rome, Italy; Secretary: D. M. Loew, Basel, Switzerland; Assistant Secretary: D. Schneider, Brugg, Switzerland; Treasurer: D. Scollo-Lavizzari, Basel, Switzerland. (Here are the Board members which followed). In addition to the officers, a Scientific and Publication Committee, under the chairmanship of W. Baust was established. This Founding Meeting of ESRS finally was terminated with the signing up of 199 Founding Members to the new society.

Some months after the Founding Congress, a 525-page book, SLEEP, edited by W. P. Koella and P. Levin, appeared, that contained all the Symposia and the Free Communications presented at the Basel Congress. “The Organizing Committee of the Congress decided to publish the proceedings with a twofold aim: first to offer to all of the participants a complete set of all information disseminated during the Congress and, second, to make available to all those interested in sleep research, a selection of the latest advances in this field,” (Preface of SLEEP, 1973). This was the start of a series of 10 books with short papers “Mini-Papers”, which documented the symposia and workshops, and selected free communications and posters. 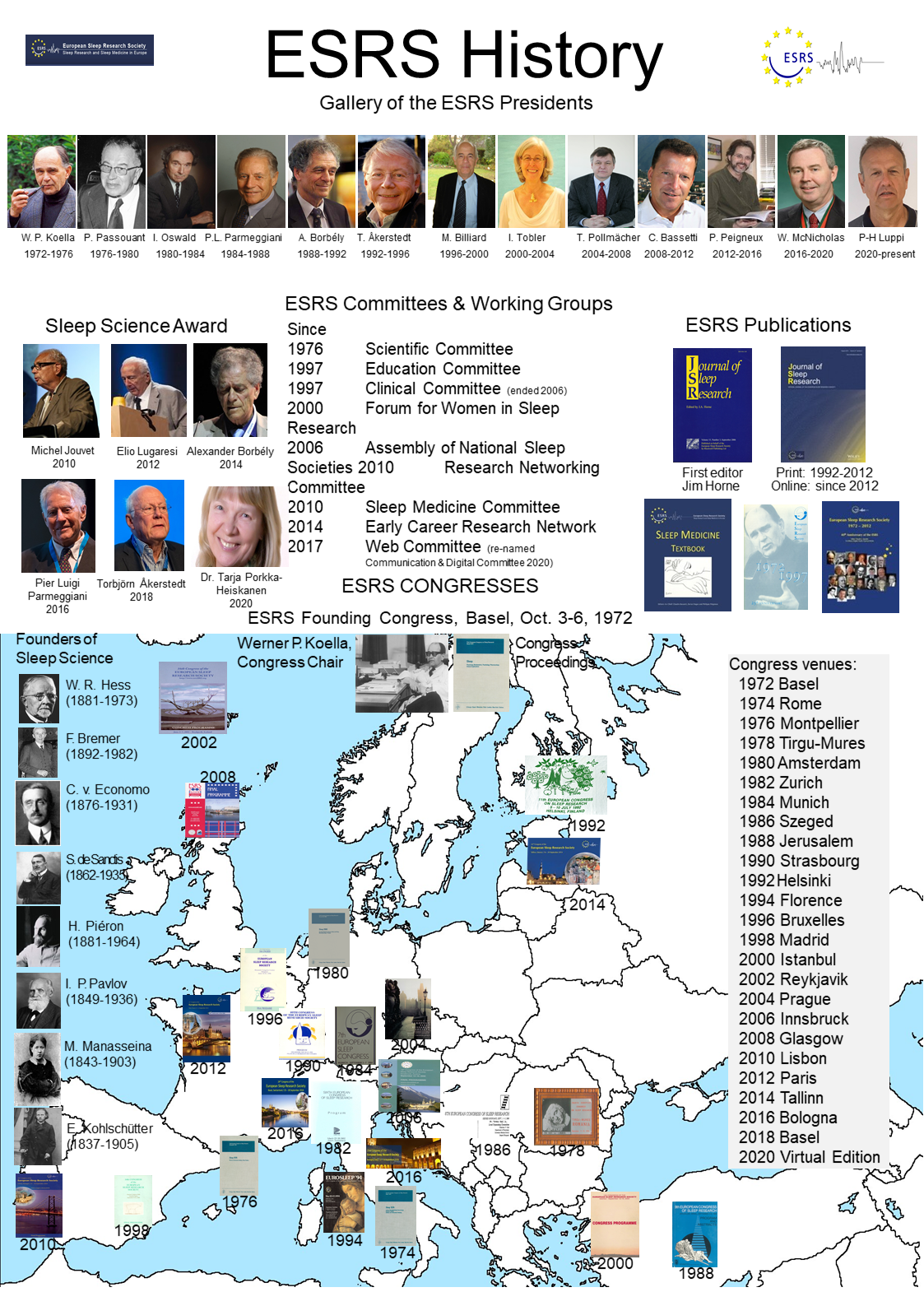