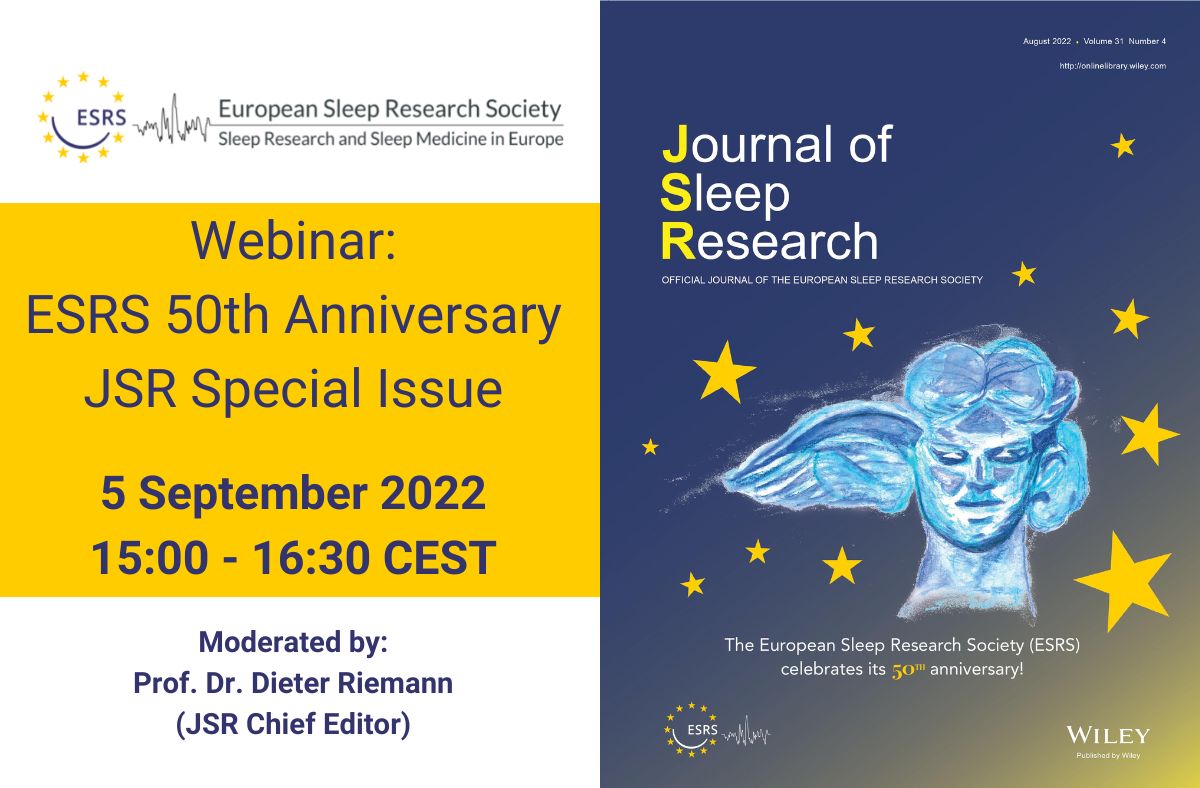 In celebration of 50 years of ESRS, the Journal of Sleep Research recently published a special edition commemorating this. It features a collection of 21 articles from well-known European clinicians and researchers from the fields of sleep medicine and sleep research.

This webinar will feature presentations from key several contributors of the special issue, including:

Kerstin Hödlmoser: Memory consolidation during sleep
Sleep has been demonstrated to play a significant role for memory consolidation and sleep scientists have started unravelling its underlying neurophysiological mechanisms. However, sleep remains a multidimensional phenomenon, and many questions remain left open for future research. In this presentation she will highlight the developmental trajectory of sleep-dependent memory consolidation processes, from their development in childhood to their potential impairments in ageing, and the nature and extent of our capabilities for information processing, learning, and memory reinforcement during sleep.

Dirk Pevernagie: OSA or OSAS? a half-century of progressing insight
Obstructive sleep apnea (OSA) and OSA syndrome (OSAS) were fully described by European researchers and investigators from Stanford university in the early seventies. OSAS was defined as the presence of obstructive respiratory events during sleep, as shown on polysomnography, in association with suggestive symptoms, e.g. excessive daytime sleepiness, and cardiometabolic complications such as hypertension. The operational definition thus seemed straightforward: OSAS = OSA + symptoms and signs. However, this equation proves problematic. Its application in clinical research and medical practice has produced equivocal outcomes. Nowadays we know that the pathophysiology of OSA is not tightly linked to clinical manifestations. OSAS appears to be a complex and heterogeneous disorder. Not all subjects with OSA require treatment, and for those who should be treated a personalized approach is recommended.

Rapid eye movement sleep behaviour disorder (RBD) has evolved within a few decades from an interesting plain parasomnia to a main focus of research in sleep, neuroscience, neurodegeration and clinical neurology.

First named and described as a sleep disorder by Carlos Schenck and Mark Mahowald in humans, European sleep researchers around Michel Jouvet and the Lyon School, have provided the basic research model to understand this entity. Also even before it´s clinical description in humans, Europeans have contributed other clinical observations that would turn out later to be part of RBD

A lively international research activity has developed around biomarkers in RBD, in particular detection of novel, and evaluation of existing biomarkers with respect to their potential to predict (e.g. time and endpoint) conversion of clinically isolated RBD to full-blown manifest daytime neurodegenerative disease. Another promising research area is to detect RBD even earlier in its prodromal stage.

While in this fast growing research area important contributions come from multiple fields, for RBD, the area of sleep medicine and sleep research is of utmost importance and by far the most relevant one to promote RBD research.

Video-polysomnography is far more than the required diagnostic instrument RBD, it also holds high potential as a marker of progression, treatment response and to identify different phenotypes of RBD. Video-polysomnography is also the Gold Standard, against which screening instruments (traditional ones such as screening questionnaires or actigraphy,  or more novel approaches using artificial intelligence) have to be tested. In Europe, several research groups dedicate their work and activities to RBD, and experience the rewards and satisfaction of being able to both address the disorder clinically and contribute to advances in the area.